Aess. She pursued a B.S. in Environmental Studies and International Relations in NY, where she was introduced to wildlife ecology and ornithology. She is now studying at SUNY ESF and conducting research on birds in caca. 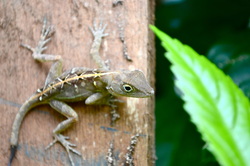 In my lifetime, I have witnessed remarkable biogeographic differences, from Eastern deciduous forests in North America to the coastal forests of the Hispaniola. I have a broad range of conservation interests, however, the possibility of finding the same migratory bird in both of these places has never ceased to amaze me. I am determined to develop a model to predict changes in bird communities as a response to habitat degradation in both breeding and wintering grounds. In addition, I would like to identify and monitor bird species that can be used as indicators of habitat quality in important ecosystems like temperate salt marshes, tropical mangroves and riparian corridors.

I believe there is a knowledge gap between foreign research efforts and local institutions in Latin America and the Caribbean region. Most research findings remain abroad, as dissertations or journal articles that never make it back to the site in question. How can we address this issue? I want to be able to translate science into policy that can be shaped by local cultural values. I want to conduct research that can be used to empower communities to manage their wildlife and sustain long-term environmental education programs.